This represents the first year of two, three and four-year funding agreements with National Sport Organisations and over the four-year Tokyo cycle, almost $250 million will be invested by HPSNZ into New Zealand’s high performance sporting system, primarily through:

“At the core of this investment approach is our performance driven philosophy. Each of these five strands of investment plays a key role in strengthening New Zealand’s HP system and the unprecedented results in Rio and world championships across the past four years reinforce that we have got the right approach.”

“This is a proven approach that has now provided a balance of funding we are confident will achieve the best possible results in Tokyo and across targeted world championships,” says Mr Baumann.

Today’s announcement saw sailing and athletics both secure significant increases in core funding following outstanding performance in Rio. These are both sports which have also demonstrated strong progress around future talent and performance systems, and have quality high performance people underpinning their programmes towards Tokyo.

The potential of team sports was also recognised, with increases for both women’s rugby 7s and women’s hockey. This investment in the Black Ferns 7s will support their quest for Olympic Gold, while investment in the Blackstick’s women will look to secure an elusive medal in Tokyo after two close 4th placings in London and Rio.

Canoe racing has also received a significant increase to support a new centralised HP programme in Karapiro planned for 2017 onwards. Built around Lisa Carrington’s success, this programme also recognises the potential of the women’s K4, which finished a strong 5th in Rio, and some untapped potential in other disciplines within the sport.

Paralympics New Zealand also continues to build on an outstanding Rio 2016 Paralympics and supports the expansion of the HP athlete development system to build a more sustainable system for current and future Paralympians. A significant increase will support the Para-Athletics programme, which produced some outstanding performances in Rio and made a compelling case on their future potential towards Tokyo and beyond.

“Some sports have delivered quality performance on the world stage and been given slightly increased investment to see how much more they might achieve. A few who have not met either our or their own expectations have had reductions, however we will continue to work closely with them to meet all the HP system goals for the next cycle and beyond.”

Triathlon and swimming are two sports that saw decreased investment following underperformance in Rio, however their future potential has led to an allocation of new investment at a reduced level for two years, with a review in 2018 to evaluate progress. Cycling also receives a reduction, however the track programme has developed some quality depth across the Rio cycle that demonstrates it will feature again as a multi-medal sport in Tokyo 2020.

Women’s football is de-carded as a campaign sport and is reduced after failing to get out of the group stages at the World Cup and Rio Olympics but retains investment over three years to assist with their 2019 world cup preparations.

Men’s Rugby 7s received a decrease after a disappointing 5th place in Rio but HPSNZ remains confident in the HP leadership, the new coaching team and a quality player talent pool across the programme going forward.

Today’s programme also acknowledges a number of new Olympic disciplines on the Tokyo programme, including women’s softball and surfing – both of which have accessed seed funding to provide an early opportunity to prepare for Olympic qualification and demonstrate they are medal capable later in the cycle.

With a new white-water facility in Wero, South Auckland and the emerging talent of a number of self-funded campaigns, canoe slalom will now receive an increase to look to build on the outstanding Olympic Silver medal performance of Luuka Jones who has re-committed to Tokyo.

There are also increases for individual campaigns including shooter Natalie Rooney and gymnast Dylan Schmidt, to focus primarily on additional world-class coaching and international competition support.

The non-Olympic sport of Surf Lifesaving, who delivered their third consecutive world championship win, also receive an increase to enhance their preparation for the 2018 World Championships campaign while Rugby League will also receive the previously approved increase to support their preparations and build up towards the 2017 World Cup that will take place in New Zealand next year.

There is also a further commitment to the next generation athletes with more investment in the emerging talent PEGs programme. This will mean a new group of New Zealand athletes across targeted sports will be given an opportunity to accelerate their development towards 2024.

In addition, investment in the evolution of the HP medical model will also provide sport requested improved and enhanced medicine and physiotherapy support to athletes at home and abroad. The model provides for athletes both within their daily training environments in New Zealand and offshore and overseas in the World Cup and World Championship environments on an annual basis. 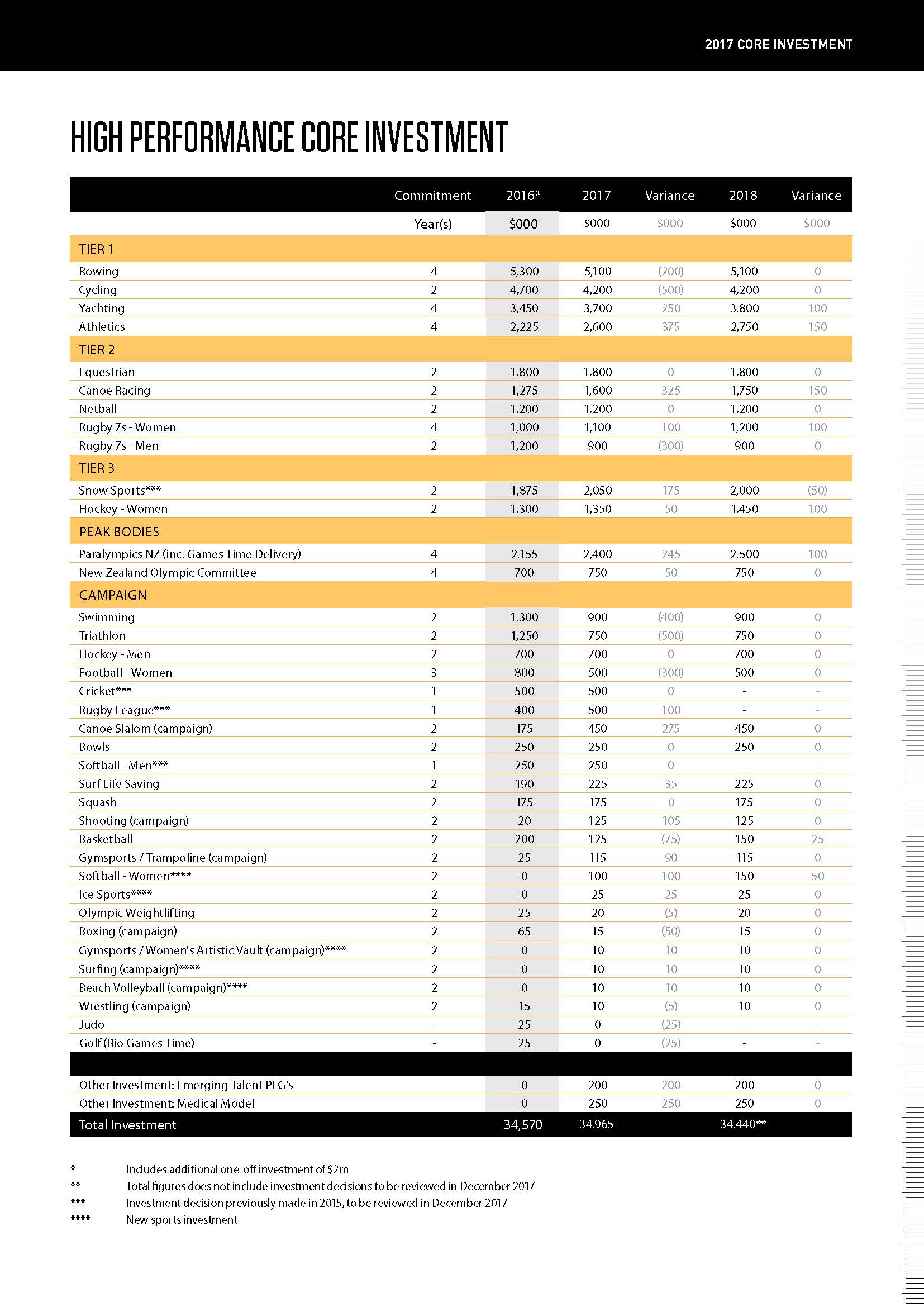