Swimmer Lewis Clareburt has worked closely with High Performance Sport New Zealand strength and conditioning specialist Adam Allen to turn a weakness into a strength in an effort to boost his Tokyo medal prospects.

Identified several years ago as the weakest of his four strokes, the World and Commonwealth 400m individual medley bronze medallist set out determined to make improvements to his breaststroke technique.

To help Lewis generate greater power in his breaststroke kick, Adam introduced squat jumping into the programme – in which the swimmer lowered into a deep squat before leaping explosively.

“The exercises help increase power output and his ability to apply force,” explains Adam. “Once he developed this on dry land, he then needed to translate this to the water. This is where Lewis’ coach, Gary Hollywood, comes in.”

The work has been consistently carried out over a two to three-year period and Adam says there is no doubt it has played a part in enhancing Lewis’ breaststroke kick.

To this day squats are a regular part of the Wellington-based athlete’s training programme and Adam has been delighted with the progress made.

“We were able to shift the deficiency in his breaststroke kick, to the point where breaststroke is now one of Lewis’ better strokes.”

Adam is keen to emphasise the integrated approach to Lewis’ training and pinpoints the work done with the help of the physio team to enhance the athlete’s stroke rate in backstroke.

“His physios’ role cannot be discounted,” adds Adam. “After talking to them we would try and get Lewis into positions so he can rotate through his thoracic spine. This work has enabled Lewis to catch the water better, which has helped improve his backstroke timing.” 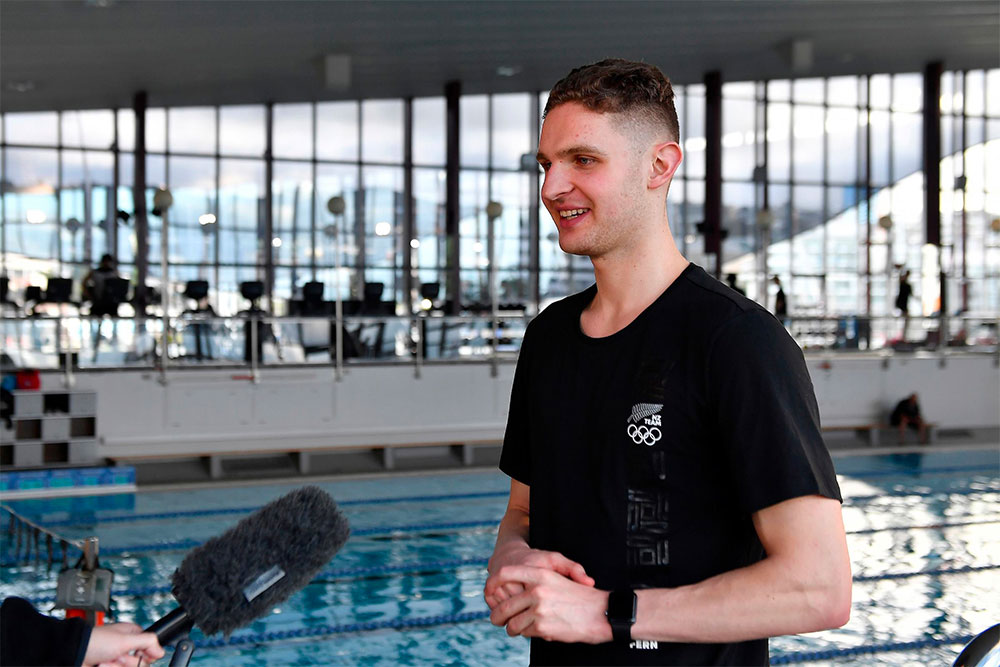 Lewis’ coach, Gary has stressed the importance to Adam of not over-developing the swimmer’s muscularity.

As an endurance athlete in a high volume sport he needs to remain lithe and subtle with lower and upper body strength enhanced by exercises such as trap bar jumps and medicine ball slams.

“I try not to bombard him with too many numbers but in the gym, I get him to move weight at a specific speed,” explains Adam. “For example, I might want Lewis to move a 30kg weight on a trap bar jump at 1.7m/s per second and to carry out the exercise repeatedly for power endurance.”

The explosive nature of the exercises has also helped develop another skill in Lewis’ armoury – his ability to kick off the wall on each tumble turn.

“It is a very unique skill as he hits off the wall like a punch and then drives away from the wall which allows him to gain real momentum into his next stroke,” adds Adam.

Adam says he is fortunate to be a part of a collaborative support team but he admits Lewis deserves all the credit.

“He’s been phenomenal,” he adds. “He likes a joke and a bit of banter in the gym but as soon as it is time to train he knows when to switch it on and off.

“Lewis is very driven and will call it out if something is not right. He knows what he wants.”