Lifting heavy may be one method of strengthening the muscles but eccentric training offers a more efficient and effective way of developing strength for multiple world champion Tom Walsh.

Eccentric training in which the speed and tempo of the exercises are changed can challenge muscles and ensure a greater bang for your buck approach to training.

An example of an eccentric movement is when your muscles lengthen while they are under load – like glutes when lowering into a squat or the biceps lowering a dumbbell after a curl.

“When doing concentric (muscle shortening) exercises you can go fast or heavy but you can’t do fast and heavy simultaneously.  In contrast the unique stimulus that eccentric training provides is to allow high muscle tensions and high speed to be trained at the same time – which in turn leads to different muscular adaptations. The problem with traditional strength work is that even in mild excess it can actually depress fast twitch muscles,” explains Angus.

Tom has a range of eccentric training tools at his disposal thanks to both the HPSNZ Goldmine project and a local New Zealand company who have engineered exercise machines specifically for his use.

Another area where Tom looks to steal a march on his opponents is via the additional amount of rotational work he is carrying out as part of his training with Angus, John Wilson (who implements and oversees the programme with Tom based in Christchurch) and coach Dale Stevenson. “Within the HPSNZ system we have also been lucky to be able to draw on the expertise of Mike Schofield in both throws specifically and rotational power in general, so I think as a wider team our collective IP is pretty good in that space.”

The motion of the shot put or indeed of the throws is rotational, so developing rotational strength and power is key.

Various exercises can be done to develop this including cable work, rotations, medicine balls, banded work and even barbell options particularly with the landmine set up. The rotation develops a stronger core as the user resists the weight of the loaded barbell.

“We have seen when Tom has been training with other groups of throwers overseas, he does a lot more rotational work compared to many of his rivals,” adds Angus. 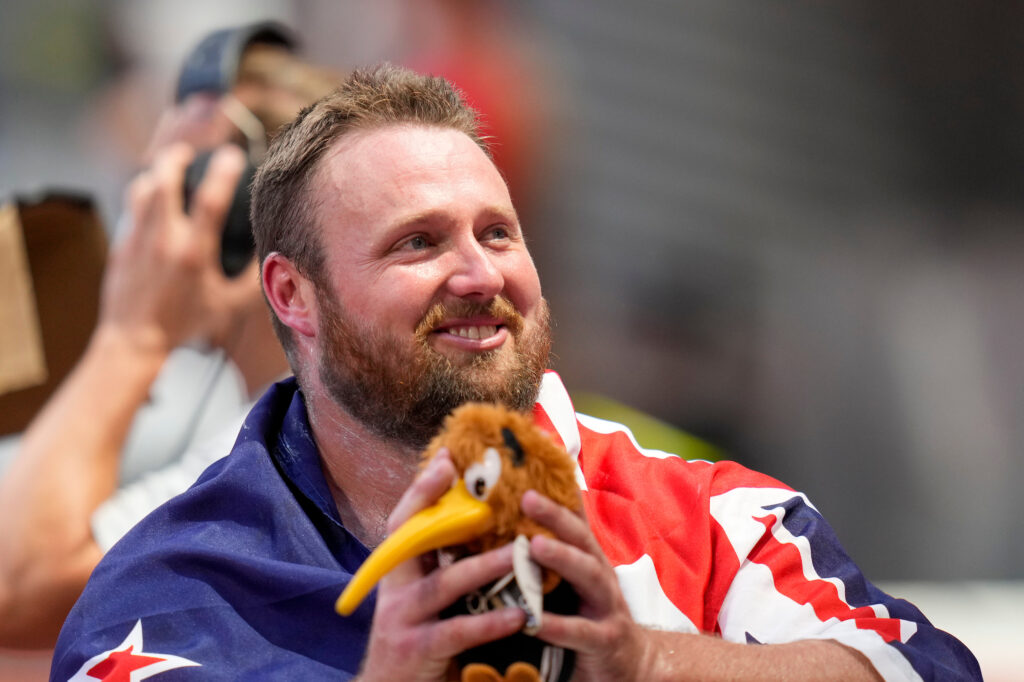 “Tom is six feet tall but many of his rivals are much taller. However, Tom is very co-ordinated. He is a motor genius in how he transfers energy into the shot put.”

The Hamilton-based thrower has struggled with thoracic spine issues, but Angus has modified her training significantly to help avoid any further injury niggles.

“More recently Julia has not done many squats or dead lifts which are a staple of most training programmes,” he says. “We have limited the Olympic lifting and replaced with pulling sleds forwards, backwards and sideways to minimise the compressive impact on the thoracic spine.”

The new exercises have provided extra motivation and she continues to set and further improve her personal best performances.