The Tokyo Olympic Games are expected to be the hottest ever, making the heat and humidity one of the biggest challenges facing the athletes in sports like rowing, which requires them to be outdoors for long periods of time.

Caroline says work on how athletes will beat the heat has been ongoing since the 2017 World Rowing Championships in Sarasota, Florida – which were held in similar conditions to Tokyo.

The use of ice vests and slushies (ice drinks) are two common pre-cooling strategies adopted by the New Zealand team, but the development of pre-race cold water immersion has been a real focus in the countdown to Tokyo.

“We found sitting in cold water between 12-15C for ten minutes, ideally 90 minutes before a race, resulted in a drop in core temperature,” she explains. “In hot temperatures this then allowed the body to feel more comfortable for the start of their race.”

“The thermal comfort scale is generally much better doing the immersion three hours before a race than it would be without it,” she explains. “With this in mind, we will set up some inflatable baths in the village.

“Sitting in cold water is very uncomfortable for the athletes but in the end they know the return will be better for them.” 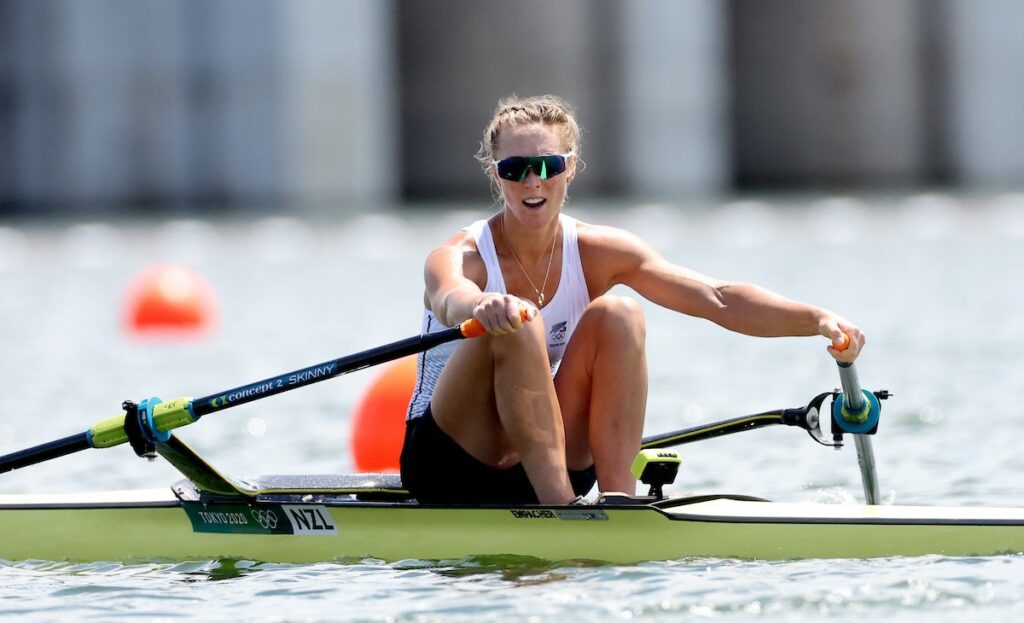 Caroline and team were also thrown another curve ball following the outbreak of the global pandemic last year – which led to a strict lockdown.

Unable to access the water for six to eight weeks, athletes faced a dilemma in terms of the amount of training they should carry out and how best to execute training.

“For example, if they went on a bike ride, restrictions meant they could not go far from their home and they had to be creative with some looped routes. We had to get them on the ergs to do the right amount of training which would be long enough to ensure good stimulus but not too long that they would be an injury risk.”

Supported by other members of the performance team – including performance scientist Justin Evans, strength and conditioning coach Ryan Turfrey and the Rowing NZ coaches – Caroline was involved in putting together a training plan for the rowers to maintain fitness levels through erg work, cycling running and strength work.

The work was not easy and sometimes monotonous and regularly involved several erg sessions of up to 90 minutes.

However, physiological testing proved that post-lockdown many of the athletes had made improvements during the six-eight week period training from home.

“The reason for this is the athletes got to work at their own individual intensities every day,” explains Caroline.

“The fact that they did also says a lot about the level of trust shown by the athletes. They all bought into what we are doing no matter how uncomfortable it might be. The group are a very impressive. Collectively they are just so motivated.”